Untracht Early has been named a 2016 top 200 accounting firm in the U.S. for the sixth straight year by INSIDE Public Accounting (IPA). 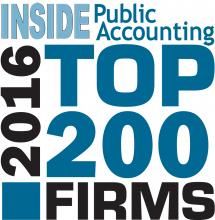 IPA 200 firms are ranked by U.S. net revenues and are compiled by analyzing more than 540 responses to IPA’s Survey and Analysis of Firms. This is IPA’s 26th annual ranking of the largest accounting firms in the nation.  The IPA 200 firms range in size from $15 million to $34 million.  This is the largest “by-revenue” and one of the most comprehensive lists of U.S. based public accounting firms in the industry.