Apprehension.  Although I actively sought an opportunity to work with kids, I was still apprehensive.  Why these feelings?  Because I am a parent to high schoolers and I know what they can be like.  When the kids walked into the room I tried to gauge their reactions.  Happy to be at Finance Park? Excited for a day out of the classroom?  Nervous about what the day would hold?  Quickly enough, we got down to business.  A member of Junior Achievement’s staff began explaining to the room of kids what Finance Park was about, what they should expect throughout the day, and the steps they would take from start to finish.  I observed the group assigned to me – ten high schoolers, mainly juniors with a few sophomores among them.  They listened to the instructions, visibly perking up when they were told that the day’s activities would involve using a tablet to perform their tasks, only to deflate slightly when they were further informed that their tablets had no internet access.

Finance Park begins by assigning every student a persona.  Their persona includes a job with a stated annual salary, a marital status, a level of debt, number of children, highest level of education completed, and monthly take home amounts.  Once the group had a chance to read their bio details, our table of ten discussed the persona they would be assuming for the day.  This led to some discussion about whether a college education was required for certain jobs and also level of education debt relative to a career path.  It was clear that some of the kids may not have thought this through before.

Our next task was to research various household expenditures.  The students were brought into Finance Park itself and learned the cost of items such as health insurance (“Does insurance really cost that much?”), mortgages (“Maybe I won’t be able to buy and I have to rent.”), groceries (“Does my family really need to eat three times a day?”), and utilities (“Can my family live off the grid?”).

Once the research was complete, the students were tasked with working on their budget for one month.  Their bio had already provided them with their monthly take home and they had to determine how they could stretch that money to pay for all of the household expenses.  This budgeting process was the core of the lesson they were there to learn.

For those students whose persona had lucrative careers, they flew through this exercise and complained about what to do with the “extra” money after allocating funds to all of their expenses.  For those who had jobs that weren’t as lucrative, the students needed to be more creative.   The heart of my discussions with the kids at this point was needs versus wants.  Every one of the kids understood the concept.  I watched them make decisions such as buying a car that was one year older but better suited for the family, renting a home even though their persona qualified for a mortgage because that left a little extra money in the budget, foregoing Netflix in favor of not reducing contributions to retirement plans, and putting additional cash into savings accounts.

By the end of the day, the overwhelming response was appreciation for what their parents do for their families on a monthly basis.  Many students commented that they would think twice the next time they asked for new clothes or the latest phone or a car.  Lesson learned. 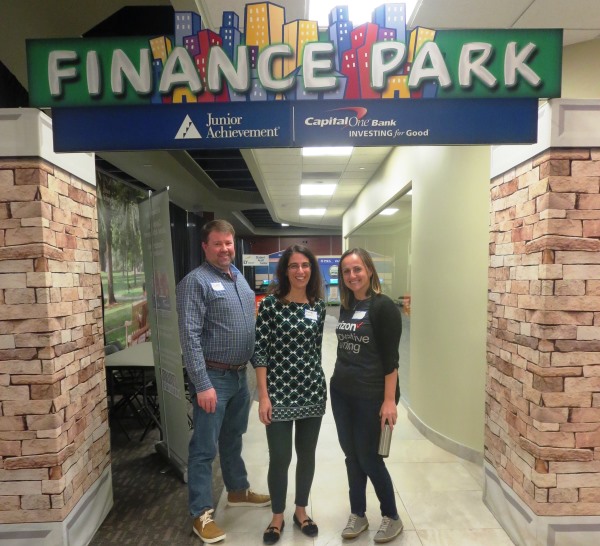 When I was growing up, my parents, primarily my mom, liked to purchase educational games and toys and trick me into thinking they were fun, like puzzles that taught geography (imagine my surprise and horror when I saw the Alaska puzzle piece compared to the New Jersey puzzle piece) and coloring books that illustrated the American Civil War and the fashions’ of the First Ladies, but looking back, my favorite was this board game called Money Matters that was kind of like a cross between The Game of Life and Monopoly, except that your chances of “winning” were better if you were poor and generous.  It’s not easy to make a game about budgeting and paying bills fun, but somehow this game managed to do it –either that, or I was a huge nerd who was easily amused.  My day volunteering with Junior Achievement Finance Park brought me back to my childhood of educational games, and I wondered if I would be able to trick these students into thinking fiscal responsibility was fun the way my mom and the designers of Money Matters somehow had.

At Finance Park, the students are given a tablet to use for the program, and they are assigned an avatar with a unique profile – they may have a spouse, they may have kids, they may have a college degree, student loans, a job that pays well, the ability to own a car and a house – or they may not.  Each student’s situation was unique.  And each student was as disappointed as I was when I got my first paycheck and saw how much of my earnings gets taken out for taxes.  The program allowed each student to budget their net pay for a wide variety of expenses, taking such things as childcare into consideration, whether or not they would pay for generic, off-brand groceries or organic food, and if they could afford a cell phone plan with all the bells and whistles, or if that money would have to be reallocated to pay for transportation to work.  It was definitely an eye-opening experience for some of the kids, and I could tell they had had their own “Money Matters” moment.  The three boys at my table reached an interesting conclusion by the end of the day, that perhaps the designers of the program didn’t intend – “We’re going to marry rich wives!” Whatever works. 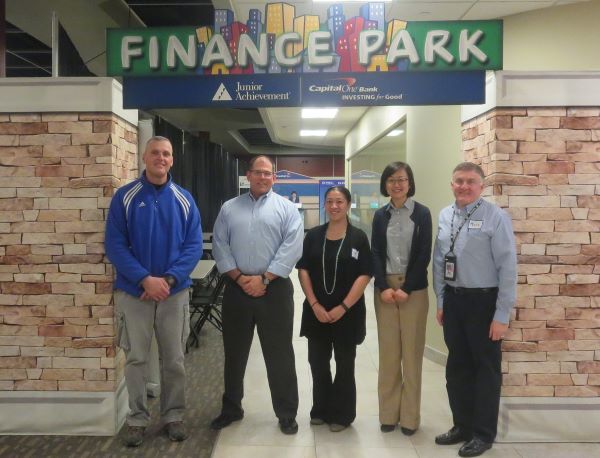 By Mae Hung, CPA (center above)

As I was driving down on the way to volunteering with Junior Achievement Finance Park program, I thought to myself, “What a great way to give back – by helping to shape the minds of our nation’s youth.”  The program is a hands-on educational program where students role-play as adults and manage a household budget.  I was excited to spend my day as a mentor and guide students with making financial decisions.

When I arrived at the facility, I was warmly greeted by the Junior Achievement (JA) staff and met with the other volunteers.  The staff led us through a mini-simulation of what we could expect during the day and I felt well-equipped for the student’s arrival.

Shortly after 9:00am, a very large, noisy group of teens filed into the facility and I was immediately struck with FEAR!  How was I going to manage a group of nine teenagers?!  Having a teenager myself I know it’s not always easy to keep their attention.

But as we went through our introductions and the students were set up with their adult personas, I felt more at ease as they giggled and groaned at learning their randomly-selected age, marital status, level of education, job, salary, and how many kids they had.  They were also shown paths that can lead to career advancement and increased salary.  It was at this time I was given the opportunity to share my story of being a single mother with a lower income job and how I went to college at 26 and earned my Master’s Degree.  This enabled me to find a higher paying position so I could provide more for my family.  I wanted to instill in the teens that no matter what life throws at you, it’s never too late to advance your career.

The next phase involved learning about all the different expenses adults need to manage in order to run a household including health insurance, mortgages, utilities, child care, groceries, clothing, transportation, entertainment, credit card payments, and many more.  The students researched, budgeted, and purchased one month of expenses based on their family situation and net monthly income.  We discussed each expense noting whether it was required or discretionary and I helped the students find a balance between wants and needs based on what they could afford.  Do you need child care so you can work?  Does your budget allow for you to buy the Mercedes-Benz or is the Toyota more in your range?  Do you have money to go to the movies or would you be better off going to the park this month?  Can you go out to eat every night or is it more cost-effective to buy groceries and cook at home?

I could see in their wide eyes and gaping mouths that it was literally eye opening for them to realize how much adults pay for the various expenses and the many decisions that have to be made in order to effectively run a household.  As in real life, some of the students had an easier time managing their budgets and others struggled.  They were able to see how different life situations afforded different lifestyles.

At the end of the day, I felt appreciative and accomplished for being able to mentor and guide my group of students in making financial decisions.  While not every student was engrossed in the simulation, it was evident that the ones that were captivated walked away with not only a greater knowledge of financial literacy but a sense of what direction they want to take in life. 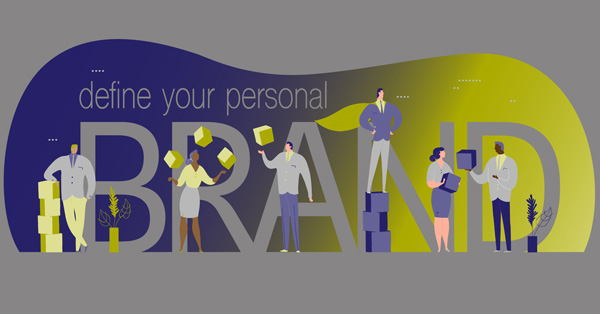 Polishing Your LinkedIn Profile: The Best Way to Define Your Personal Brand

Distinguish Yourself from the Pack as a Staff Accountant 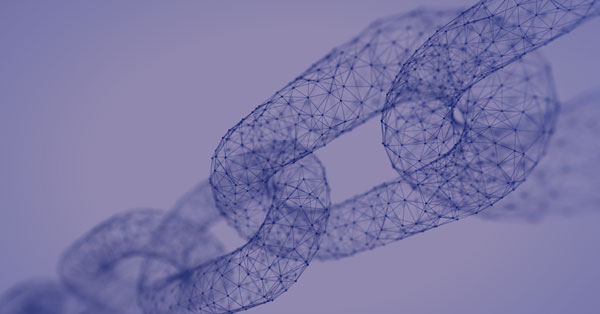 How Blockchain is Positioned to Improve Accounting Processes 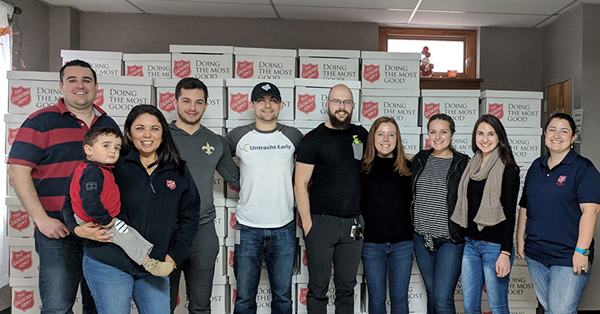 The Importance of Corporate Social Responsibility

How Blockchain is Positioned to Improve Accounting Processes
Accounting and Artificial Intelligence – An Unusual Partnership
Distinguish Yourself from the Pack as a Staff Accountant
Expense and Loss Deductibility for Trader and Investor Funds
How to Avoid Tax Filing Scams
An Inside Look at the Peer Review Process for Accounting Firms
Thomas Edgar Named Principal With the Firm
Untracht Early Director, Angela Garofalo Earns Certified Financial Planner® Credential
0 replies

Why Would a Financial Review be Chosen Instead of an Audit? Sales and Use Tax Penalties on High Value Purchases Abroad
Scroll to top